Hawaii · About Culture & History
2020 has been an eventful year, with many firsts for the history books.
But 2020 also marks some big anniversaries. Earlier this year, the Allies of World War 2 commemorated the 75th anniversary of Victory in Europe, the end of the war against the Nazis.
And now, short months later, V-J Day. Another epic moment in the history of the world: the 75th anniversary of the end of the War in the Pacific. Unlike V-E Day, V-J Day, Victory in the Pacific Day or V-P Day is marked on different dates in different affected nations.
For the Commonwealth countries of the UK, Canada, Australia, New Zealand, as well as the Netherlands, North and South Korea, the date is August 15th. That’s the day Japan announced its surrender.
The United States considers September 2nd the official end of the war. On that date, formal surrender documents were signed in a ceremony on board the USS Missouri in Tokyo Bay.
Other Asian countries, including China, Hong Kong and Macau, the Philippines and Taiwan, mark the following day, September 3rd.
This year’s 75-year commemorations are likely the final milestone anniversaries with veterans and people with living memories of the war years.
That leaves families of veterans, people with an interest in history or reverence of the sacrifices of the Greatest Generation to honor them.
Here are 3 top places to travel to commemorate and better understand the War in the Pacific.

The surprise bombing of Pearl Harbor in 1941 by over 350 Imperial Japanese aircraft killed more than 2400 Americans and injured nearly 1200 others. The shocking attack - war had not been declared between the two countries and the US was not yet at war - stunned the world. It also planted the seed of Japanese ‘kamikazi’ or suicide air bomber culture. Intended as a pre-emptive strike to wipe out American naval power in the Pacific before it could be turned on the Japanese, the attack on Pearl Harbor actually led to American military participation in World War 2.
The Pearl Harbor National Memorial is a National Park comprised of multiple sites that commemorate and educate visitors about the attack that was such a pivotal moment in US history.
The Memorial’s most unmistakable feature is the USS Arizona Memorial (pictured top). Among the 21 American ships damaged or sunk during the attack, the Japanese torpedoed the battleship Arizona. While most ships damaged or sunk during the attack at Pearl Harbor returned to service, the Arizona was left on the harbor floor as the final resting place of over a thousand sailors and Marines. In the 60's the USS Arizona Memorial - a standout example of distinctive mid-century design - was erected over the sunken ship. It straddles, but does not touch it on the ocean floor.
A visitor’s center on shore provides multi-media historical context and accounts and artifacts of the day of the attack. Visitors can take shuttle boats to and from the ship memorial. Other ships, memorials, statues and preserved structures help complete the commemoration of the event that changed the course of American history.

Bridge Over the River Kwai

The bombing of Pearl Harbor was part of a larger Japanese strategy to defeat US, British, Dutch and local powers in the Pacific that included an invasion of South-East Asia, sweeping all the way to overcome supposedly impregnable British forces and fortifications in Singapore. Their unexpected success left the Japanese stretched for supply lines and with thousands of prisoners of war.
The Japanese solution to both problems was to force Allied POW’s and captured local citizens to work as slave labor to build a 250-mile Thailand-Burma aka ‘Death Railway’. It was an impossible construction project through impenetrable South-East Asian jungle and wilderness, a concept conceived and abandoned by the British as guaranteed to kill too many workers.
The story of Japanese occupation of Asia and the Japanese Imperial Army’s torture and mistreatment of POW’s and local citizens is one of the most horrifying chapters of WW2. About 100,000 conscripted Asians and 16,000 Allied POW’s died in forced marches and inhumane conditions building the railway. 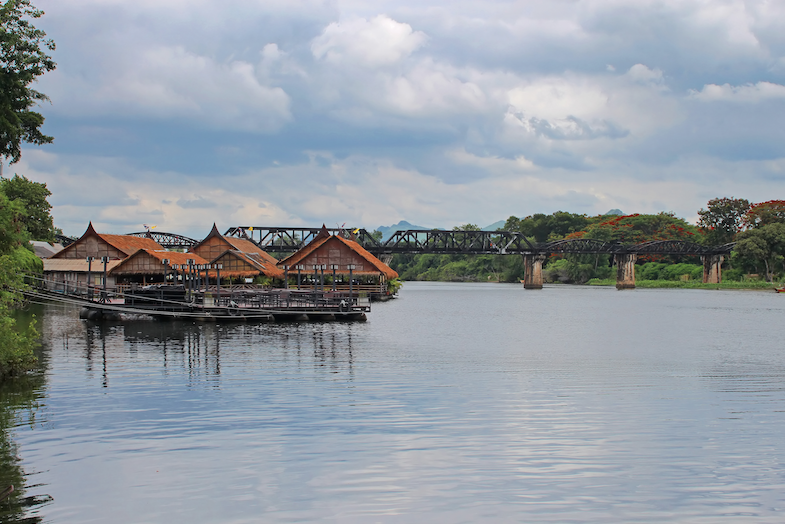 Following the war, the story of the Death Railway and the horrors faced by POW’s were immortalized in a work of fiction that got even more attention as a Hollywood movie, The Bridge Over The River Kwai. The railway bridge in this Thai city has become the spiritual center of commemoration of the Japanese POW’s and occupation.
Today, visitors to Kanchanaburi are eager to see the bridge, and experience the nearby memorial and war cemetaries. The Thailand-Burma Railway Centre hosts a museum dedicated to the history of the railway. There’s an annual pyrotechnic recreation of the Allied bombing of the bridge which is the climax of the movie. You can even ride the Burma-Thai Railway, given over to Thailand after the war. The journey is evocative, over the River Kwai Bridge, through farmland, and along steep mountains alongside the river.
And outside the city, the ‘Hellfire Pass’ (pictured below) Interpretive Centre and Memorial Walking Trail preserves one of the most famously lethal sections of the railway through a rock cutting and along a section of original rail track bed (no longer in use) carved out by hand by POW’s, whose recorded memories are part of an audio tour. 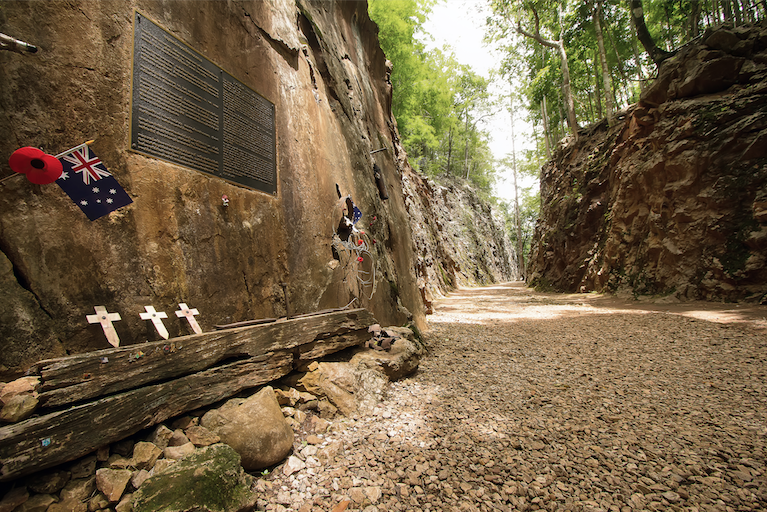 In August, 1945, Japan became the first – and only – country to be targeted by a nuclear attack.  Two new, atomic bombs were dropped on cities in Japan, one on Hiroshima, and the other on Nagasaki. The Japanese surrendered soon after seeing the unimaginable power of this new weapon.
Even for a horrifying war, the results of atomic warfare haunted observers and became the stuff of nightmares of people around the world during the Cold War that followed. Humans and buildings at the epicenters of the explosions vaporized. People leaving behind only their shadows. Hideously wounded survivors poisoned by fallout. Hundreds of thousands of city residents dead in the explosions, from burn injuries and ultimately radiation sickness. 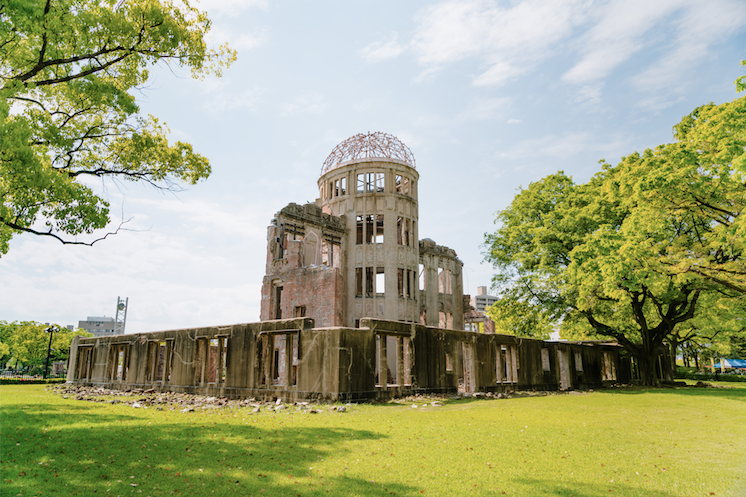 After the war, the riverside area around the epicenter of the Hiroshima atomic bomb was rededicated as the Hiroshima Peace Memorial Park, complete with cenotaph, and moving exhibits of the aftermath of the bombing, including multiple clocks and watches frozen at 8:15 am by the blast. The site is symbolized by the skeletal Hiroshima Dome, the remains of the only identifiable building remaining after the atomic bomb exploded.
A visit to Hiroshima today is a powerful warning for humanity to never again unleash nuclear weapons.
All three of these Pacific War sites highlight the horrors of a terrible war from a different point of view, and all are emotional to visit, but no traveler will regret adding these memorial locations to a bucket list of trips to take soon.
As we pass the 75th anniversary of the ending of the war, commemorative travel becomes even more important to preserve the memories and lessons of war.
﻿

Images: Getty
Copyright BestTrip.TV/Influence Entertainment Group Inc or Rights Holder. All rights reserved. You are welcome to share this material from this page, but it may not be published, broadcast, rewritten or redistributed.

Enjoy a Rum-Soaked Taste of Antigua This Holiday S...

Exclusive! Behind the Scenes Video from the New Ja...